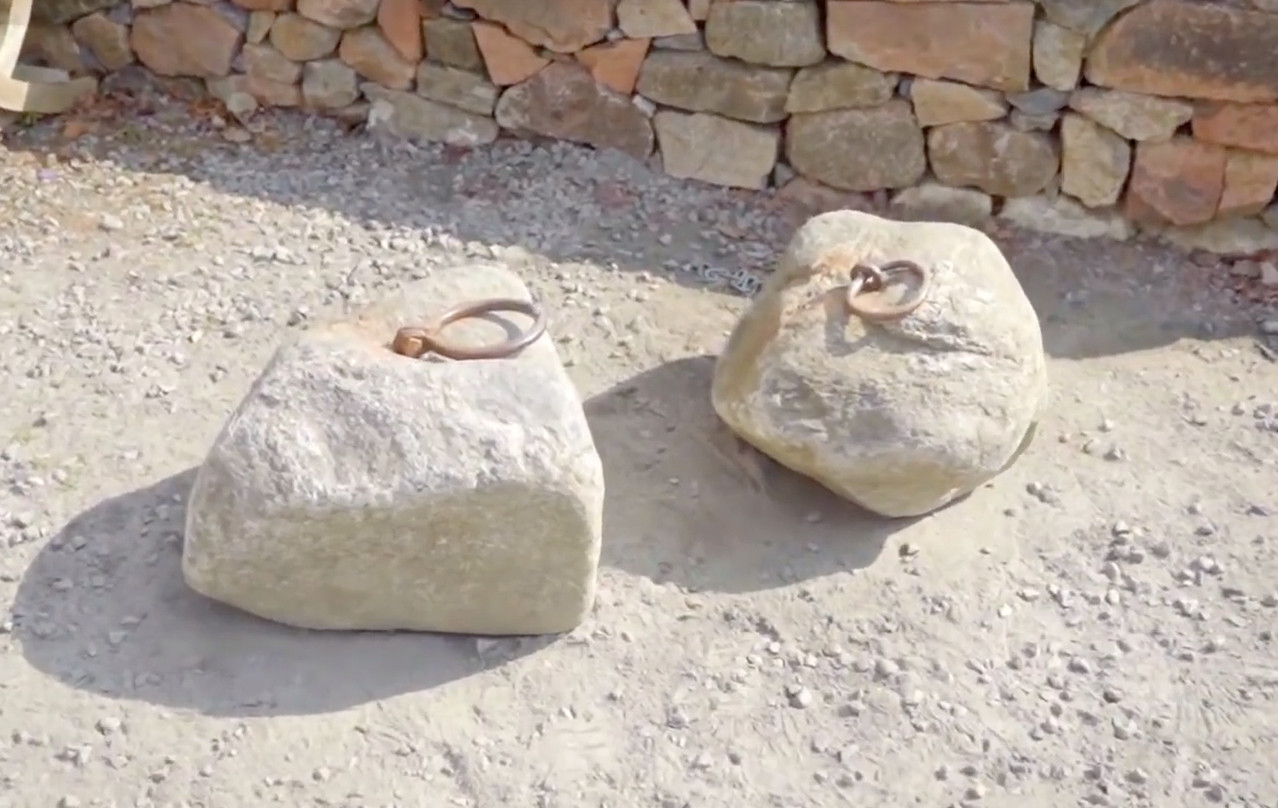 Outside of a café next to the River Dee lies a pair of stones named after Donald Dinnie, the first world-famous sportsman.

Unlike traditional lifting stones, the Dinnie stones each have a ring attached for lifting.

There are a multiple challenges to take on.

The first challenge is to simply lift the two stones together off the ground. Lifting the stones and standing locked-out (legs fully staightened, body upright and braced) for two seconds is considered a successful lift. This challenge can be completed with straps (assisted) or without (unassisted), and is recorded as such. A partial lift (putting wind beneath the stones, but failing to achieve lock-out for two seconds) is not recorded officially, but is still considered a great feat.

Another challenge is to attempt Donald Dinnie’s incredible feat of walking the stones over a distance. Putting the stones down and lifting again is allowed. However if you take more than 10 seconds to lift the stones again, your attempt is over.

In recent years, the lift and hold for time has become a popular test. The lifter picks up the stones (without straps) and holds the stones in the air for as long as possible, testing their grip strength, and their will. The first lift for time competition was held in 2016 at the Aboyne Highland games, introduced by Terry and Jan Todd.

The final challenge is to pick up the stones in a farmers-walk style carry, and walk with the stones as far as possible without dropping.

To take on the Dinnie stone challenge, you must arrange the lift with the owners - following the guidelines on the ‘set up your lift’ page on thedinniestones.com. Doing this ensures that your lift will be judged by Dinnie stone officials who will accurately record your attempt. 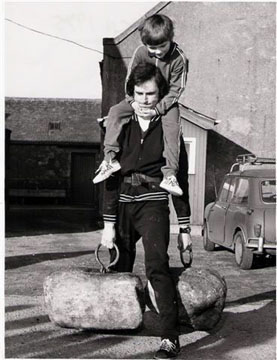 Jim Splaine was so successful at lifting the stones he famously carried his son to add extra weight. Jim attends every Dinnie Stone event and photographs each lift to document them.

Robert Dinnie was a stone mason, and had the job of maintaining the Potarch bridge. Sometime in the early 1830’s, iron rings were attached to each stone to act as counterweights for scaffolding during the maintenence.

Donald Dinnie carried the two stones across the width of the bridge (17’ 1.5”) in 1860. Donald himself references that his father Robert could also pick up the pair of stones together.

The stones were lost in the early 1900’s, around the time of the Great War. David Webster OBE searched for the stones and rediscovered them next to the river Dee in overgrown grass in 1953. One of the stones was missing a ring.

After the rediscovery, several people made attempts at lifting the stones only to manage a basic lift of the stones with wrist straps. The next successful bare-handed lift was made by Jack Shanks in 1972, more than 100 years after Donald Dinnie performed his feat. Not only did Jack Shanks lift the stones, but he also carried them over 17’ as Donald Dinnie did - winning him £250 from David Webster OBE in the process.

Over 150 people have lifted the stones to date - with some individuals lifting the pair of stones numerous times. Brett Nicol holds the record for most successful lifts, having lifted the stones 400 times as of November 2021!

Thanks to a documentary, social media, and the Arnold Sports festival, knowledge of the Dinnie stones and their unique challenge has increased dramatically. People from across the world are now training for the challenge and attempting the stones more than ever.

The Gathering is an annual event held at the Potarch Café and Restaurant. It features lifts of the Dinnie Stones, and other stone lifting events. The Donald Dinnie Games also features at The Gathering - a strongman-esque event with natural stones.

The Dinnie stones are kept at Potarch Café and Restaurant, near the Potarch bridge.

The precise location is on our map.

Mark Haydock holds the stone hold record with the Dinnie stones at 46.3 seconds, achieved May 18th 2019.

Brett Nicol holds the record for most successful lifts of the Dinnie stones - 400 - and counting.

Laurence Shahlaei holds the farmer’s carry record with the Dinnie stones at 14’ 10”, after beating Brian Shaw’s previous record of 11’ 6.5”.

Records and successful lifts are recorded and updated on thedinniestones.com

You can use our Dinnie Stone weight calculator to easily determine the amount of weight you’ll need to use on weight-loadable pins when training to lift the Dinnie Stones.

Gordon Dinnie had replica Dinnie Stones made. They were acquired by the Stark Center for Physical Culture and Sports. These are used at the Arnold Sports Festival as part of the record breaker events. These stones have separate records from the original stones at Potarch.

The Nicol Stones are a group of stones with iron rings gathered by Brett Nicol. They vary in weight, and are used to recreate the Dinnie Stone lifts. The heaviest two stones weigh more than the Dinnie stones, and are a challenge in their own right.

The Nicol walking stones are a pair of stones weighing around 250kg combined (138kg and 114kg), and are designed for a farmer’s walk style carry. They have been used in competitions including the Donald Dinnie Games competition at The Gathering, and Europe’s Strongest Man. 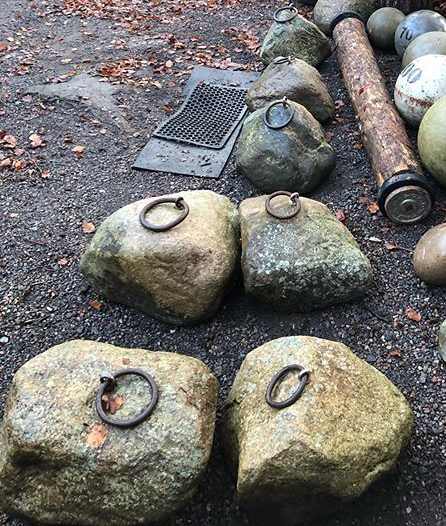 If you - or someone you know - has attempted to lift the Dinnie Stones, please send us a link, and we will add your lift to this section on this page. Youtube videos and Instagram posts are both acceptable!

Featured in Strongest Man in History S01E05 “Stronger Than a Scotsman”

A massive thanks to Brett Nicol for his contributions to this page.