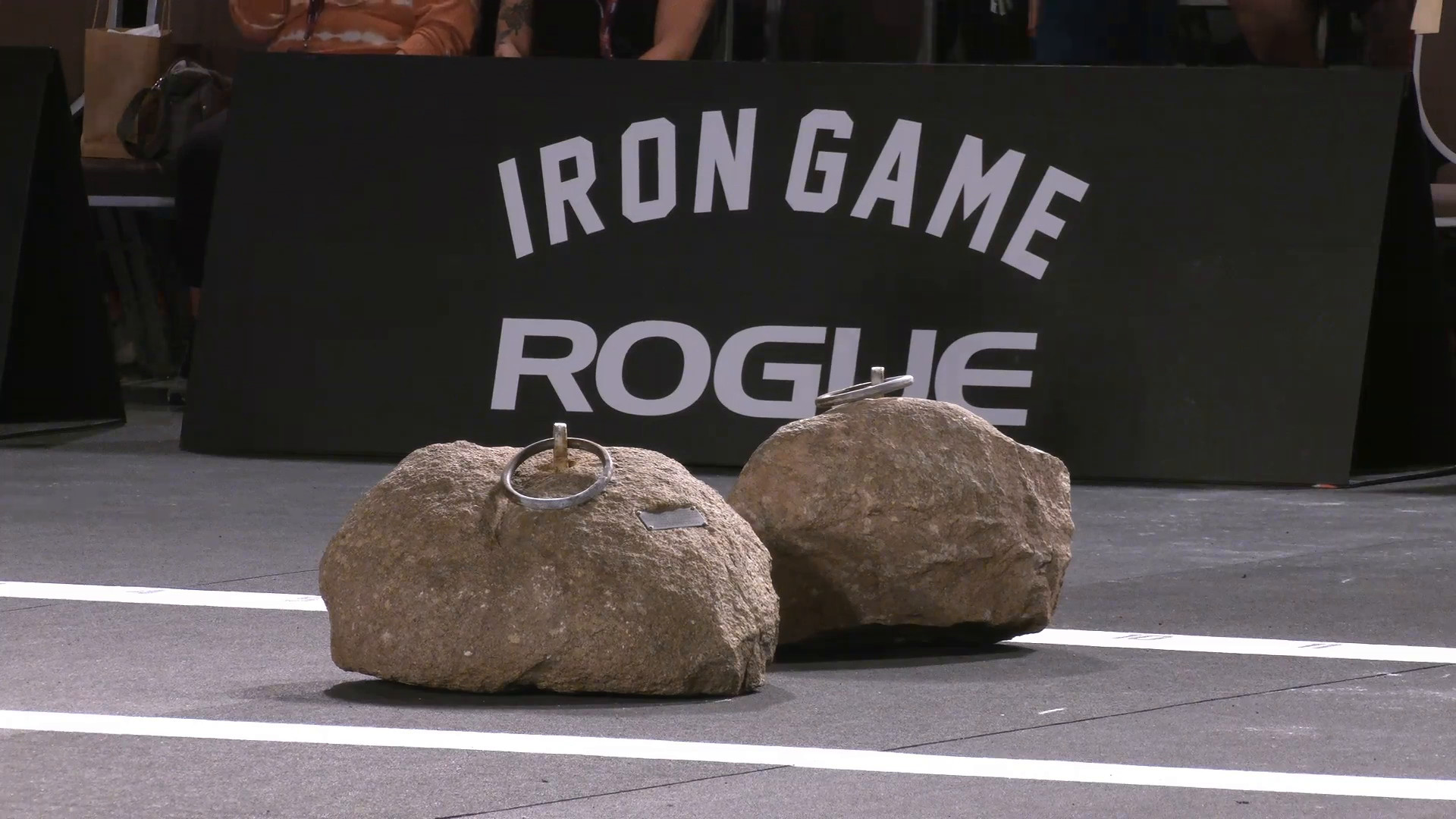 The large stone carries a plaque that reads:

Replicas of the Dinnie Stones
carried together across the width of the
bridge of Potarch, Aberdeenshire by the
great Scottish athlete Donald Dinnie
circa 1860
Commissioned by Gordon Dinnie 1998
Produced by Fyfe memorials Kemnay

They are on display in the Rogue Fitness HQ retail store in Columbus where athletes and fans are welcome to visit and attempt to lift them.

Although the stones are very similar to the original Dinnie Stones that sit in Potarch, they are not identical.

Differences from the original stones

The ring on the original large stone is fixed with a bolt. On the replicas the ring is free to rotate through the eyelet just like the small stone’s ring.

The replica stones are much less smooth than the original stones. Just from images you can see the far more sharp and jagged edges compared to the originals. The originals lend their smoothness to centuries of weathering.

Whilst the weights of the stones are as close as possible to the originals, the shapes are visibly different. The most noticable feature is the sloping on the large replica stone.

The height of the lift is also slightly higher than the original stones by approximately 1 inch.

The Replica Dinnie Stones are usually kept at the Rogue HQ retail store in Columbus Ohio when they’re not being used in competition. People are free to attempt to lift the stones inside the store on the platform3.

The records (and lifts) for the replica stones are distinct from the original stones. Each set of stones has their own records. Therefore, breaking a record on one set does not count as a record on the other.

There are numerous athletes that have lifted the replicas that have not lifted the original stones in Potarch. And it has been a point of confusion for some people.

Josh Thigpen holds the Men’s hold for time with 31.77 seconds achieved at the Rogue Record Breakers event at the Rogue Invitational in 2021. He beat Mark Felix’s previous record of 31.40 seconds.

Chloe Brennan set the Women’s hold for time at 1.33 seconds achieved at the Rogue Record Breakers event at the Arnold Sports Festival in 2022.

Kevin Faires holds the record for the carry at 25 feet 8 inches (7.85m) set at the Rogue Record Breakers event at the Arnold Sports Festival in 2022.

It’s important to note that the carry with the replica stones at the Rogue Record Breakers also uses different rules to the original stones’ carry. At RRB athletes are allowed a single 10 second drop of the stones.