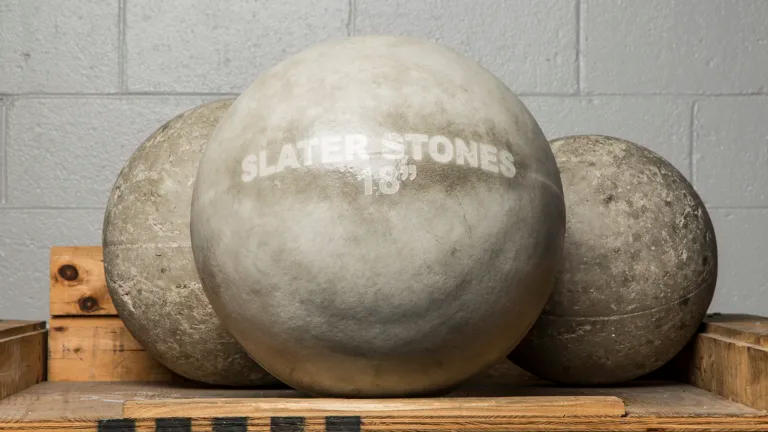 An Atlas Stone is a concrete ball, usually intended to be lifted to a platform from the floor — often in series — as part of a Strongman comptetition.

Our focus at liftingstones.org is on natural lifting stones. However, Atlas Stones are a significant part of modern stone lifting culture and they can trace their roots back to historic Scottish stonelifting.

They get their name from the Greek Titan Atlas who is condemned to hold up the heavens for eternity. Atlas has been depicted in sculptures carrying a celestial orb which is where the inspiration comes from. 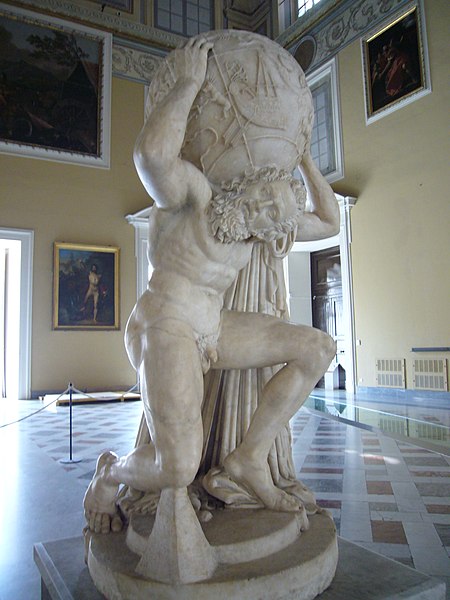 When someone mentions Strongman, most people will immediately think of Atlas Stones, they’re the quintessential Strongman event. But Atlas Stones didn’t feature in the sport until nearly a decade after the first World’s Strongest Man competition.

Atlas Stones can trace their lineage back to the Inver Stone. The story starts with an exhibition held in Glasgow featuring the Inver Stone back in 1963.

The Inver Stone’s use in the exhibition was popular with the crowd and people wanted to see more stone lifting. This influenced the creation of the McGlashen stones, a set of super smooth balls carved from granite to be used in Highland Games competitions.

Then, in 1986, the McGlashen Stones debuted at the World’s Strongest Man. The event was called Stones of Strength, inspired by the Scottish lifting stone culture. Athletes lifted each McGlashen stone onto a waist-height barrel.

Tacky — the glue-like pine resin — was not allowed to be used in the McGlashen stone events. Though it is now ubiquitously used for Atlas Stones.

The stone run (or series) is the most common event for the stones.

A series of stones are lined up in sequential weight. The stones are lifted from the ground and placed onto barrels, podiums, platforms, or over a bar. The heights of the platforms can vary.

The winner is decided by the fastest time to lift the full series of stones.

In this event, athletes pick the stone from the floor and lift it over the bar — usually at a height of 48 inches.

This can be performed for max weight (as seen at the Arnold Strongman Classic) or in series similar to the typical stone run.

For a number of years, World’s Strongest Man used the stone over bar in their ‘last man standing’ event, where two athletes would face off, lifting the stone over the bar until their opponent failed to return the stone.

The Atlas Stone is lifted from the floor to the shoulder. Often for repetitions, but in some cases for heaviest weight.

For a ‘good lift’ the athlete must hold the stone on the shoulder under control with only one hand holding the stone. The other hand is usually held out to the side once the lift is completed.

An Atlas Stone is lifted from the floor to the chest, and then pressed overhead. An uncommon event, but famously featured in the 2020 Europe’s Strongest Man competition.

There are many records for the Atlas Stones. And it’s difficult to find all Atlas Stone records because of minor differences in event setups — including weights, diameters, platform heights, and so on.

Tom Stoltman holds the record for the heaviest Atlas Stone lifted over 48 inch bar at 286kg (630lbs). Tom also owns a 304kg (670lbs) Atlas Stone which he was planning to break his own record with. These two stones are 22 inches in diameter.

Mark Jeanes holds the record for the heaviest Atlas Stone to shoulder at 200kg (440lbs)!

Mark is also the only man in history to have shouldered the Criccieth Stone.

Although you can purchase stones, you can also make your own using a mold and concrete. Slater’s Hardware sells various molds and accessories for creating stones at different sizes and weights.

Steve Slater created a video guide for creating your own stone:

Alan Thrall has his own guide using two different types of mold, as well as with other useful tips: